Yes, this is a birthday post that many apparently hate... Oh well here is my entry for YouBirthdayGiveaway2018

So the first part I have to tell you why You is my best Aqours girl, but to be honest, I'm not even sure why or when I started to love her. I can tell you a million (or maybe like 10) reasons to why I love her now but I have no idea when the first sparkle began. It's not like I could relate to her other than our shared love for uniforms. While watching the first season I didn't care for her at all and thought the conflict was meh. I actually didn't like any of the Aqours girls since I was still too attracted to µ's. However, as time went by and more Aquors stuff came, I warmed up to them. I began to like Aquors a lot more and I began to see the characters as characters and not just µ's copies. Then suddenly without me noticing, You made a whole in my heart and placed herself there. And so for some reason I became attracted to her. If I have to guess why, I think it was her voice (not singing but speaking) that I grew attracted to first and it wasn't while watching the anime. I remember while I was warming up to Aqours, I began to watch clips from the first season again and I really liked the way You said Yousoro, for some reason. So I guess that's the reason I began to love her? Well it doesn't matter how it began cause I love her and that won't change for the time being (still don't like anime You, though)

Now we come to the part where I tell you the reasons she is my best girl. So firstly as meantion before, I love her voice. Shukashuu have such a lovely and pleasant voice (Loli Shuka is great too), just give me a 10 hours Shuka ASMR! (jk I actually don't like/get ASMR) And then there is her singing voice! It's so powerful and those vibrations! Ahh I love it! Beginner's Sailing is definitely one of her best work (for now). Shukashuu is also cute as hell, her smile will bring the dead to life someday I'm sure.

Another thing I like about You is her design. Short, a little curly gray hair with lovely blue eyes, I love it. And also glasses! Plus I like her fashion sense, if I had to dress like any LL character it would be her (or Eli/Dia/Maki).

Well I do have other reasons to why I like her but I'm sure it would be boring to read (and I don't have time), so I want to tell you (not You) the thing I'm most conflicted about, in terms of You as a character (other than the anime), and that is... 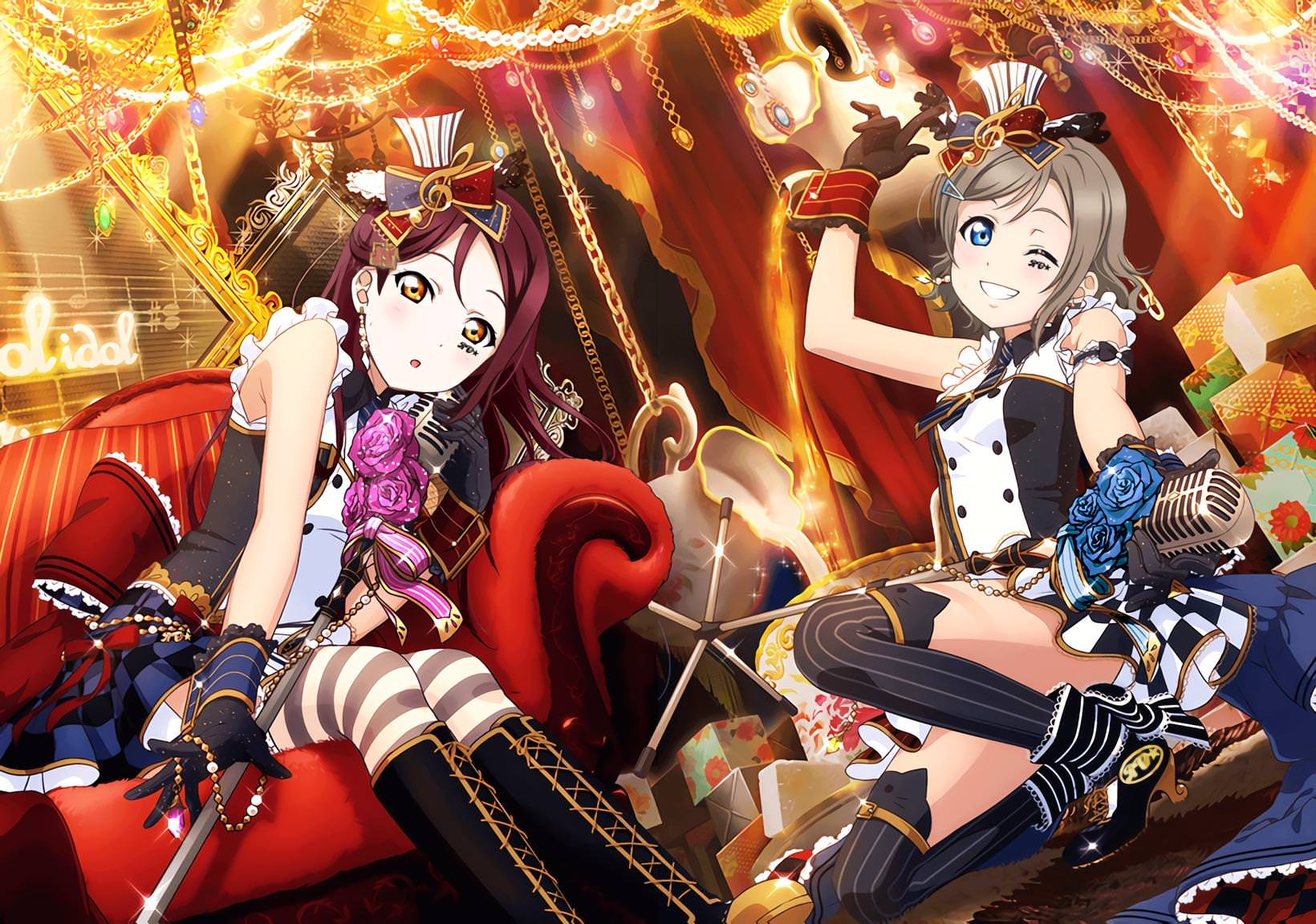 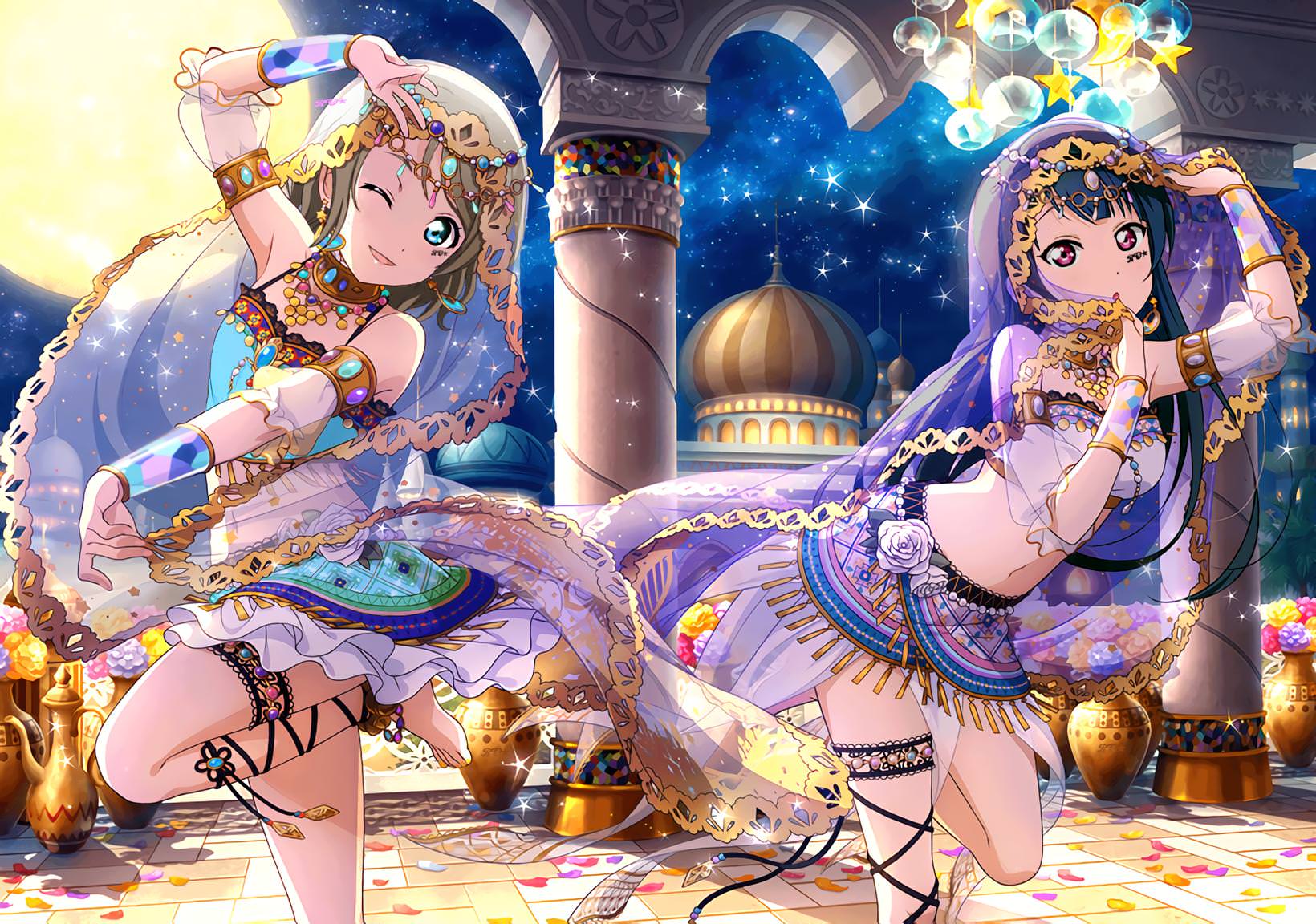 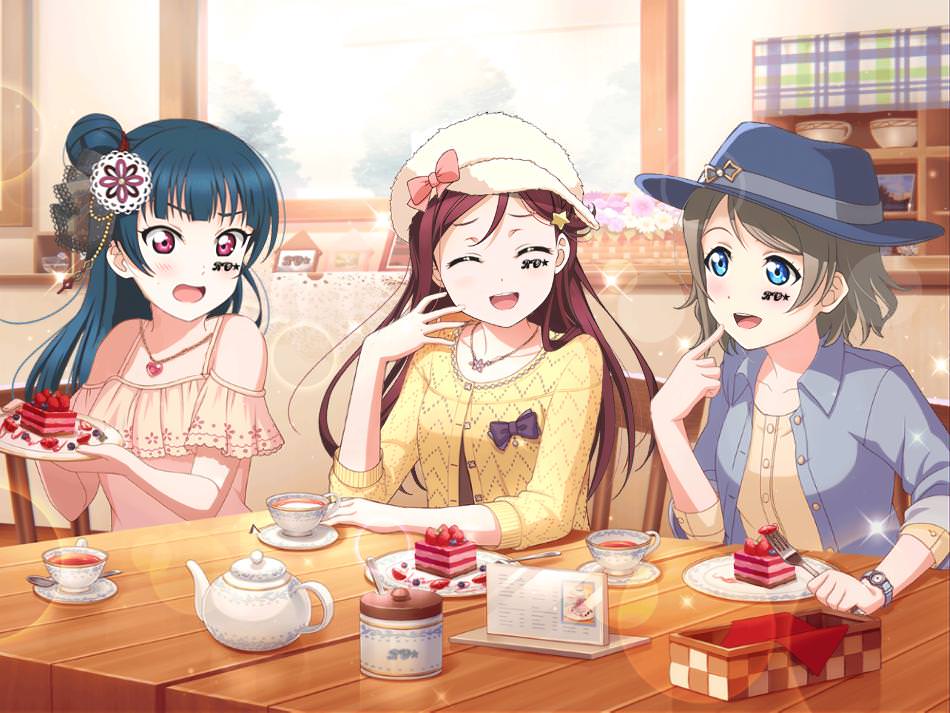 A little rushed version for now

I don't know what to ship.

Oh well, here are some You edits:

Give me some more alternative hair styles KLab or Bushiroad or something, I don't know who is in charge of making thecards...

I also want to see You in a different light...

And more ikemen You!! 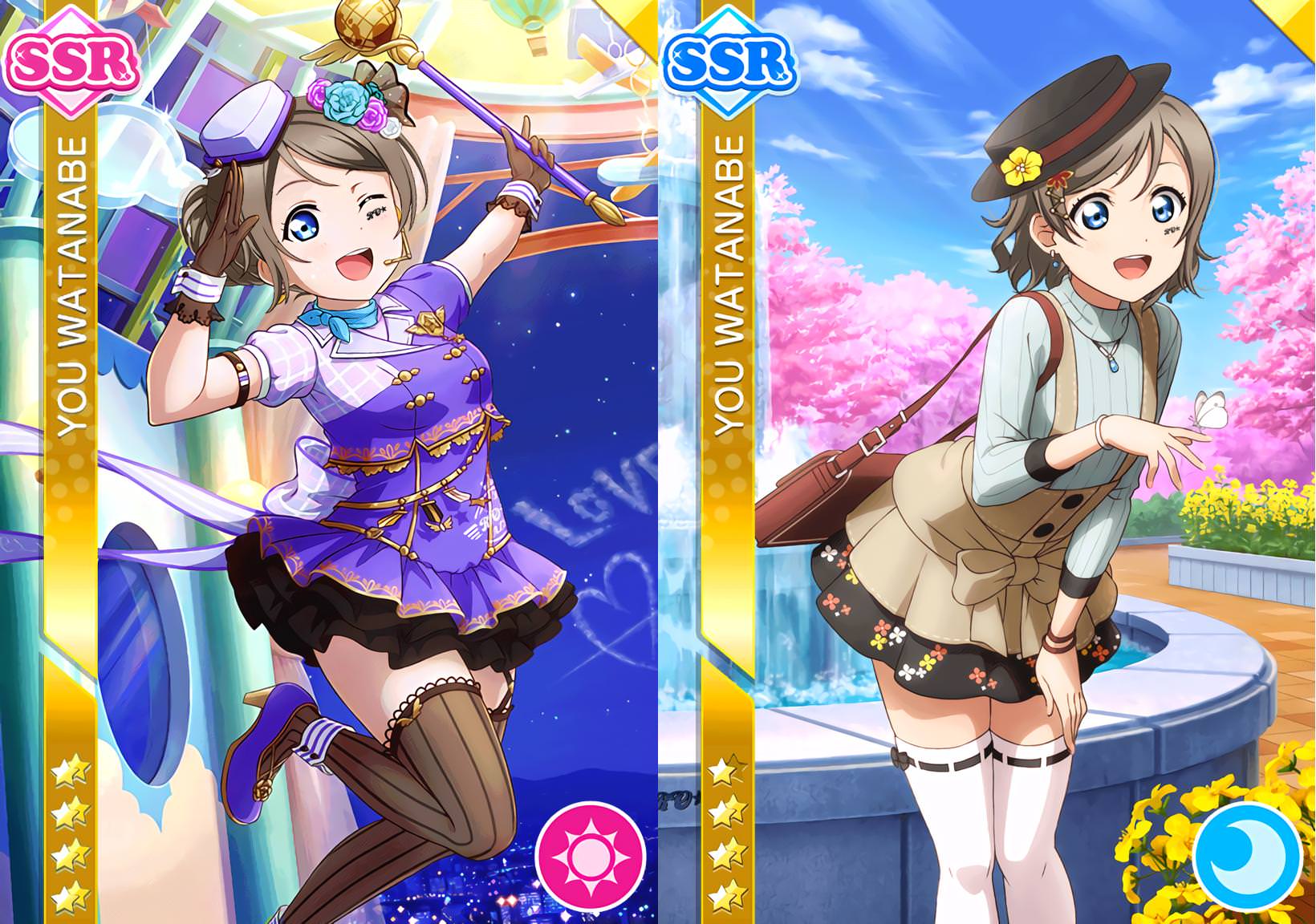 But the cards You have now are still lovely. 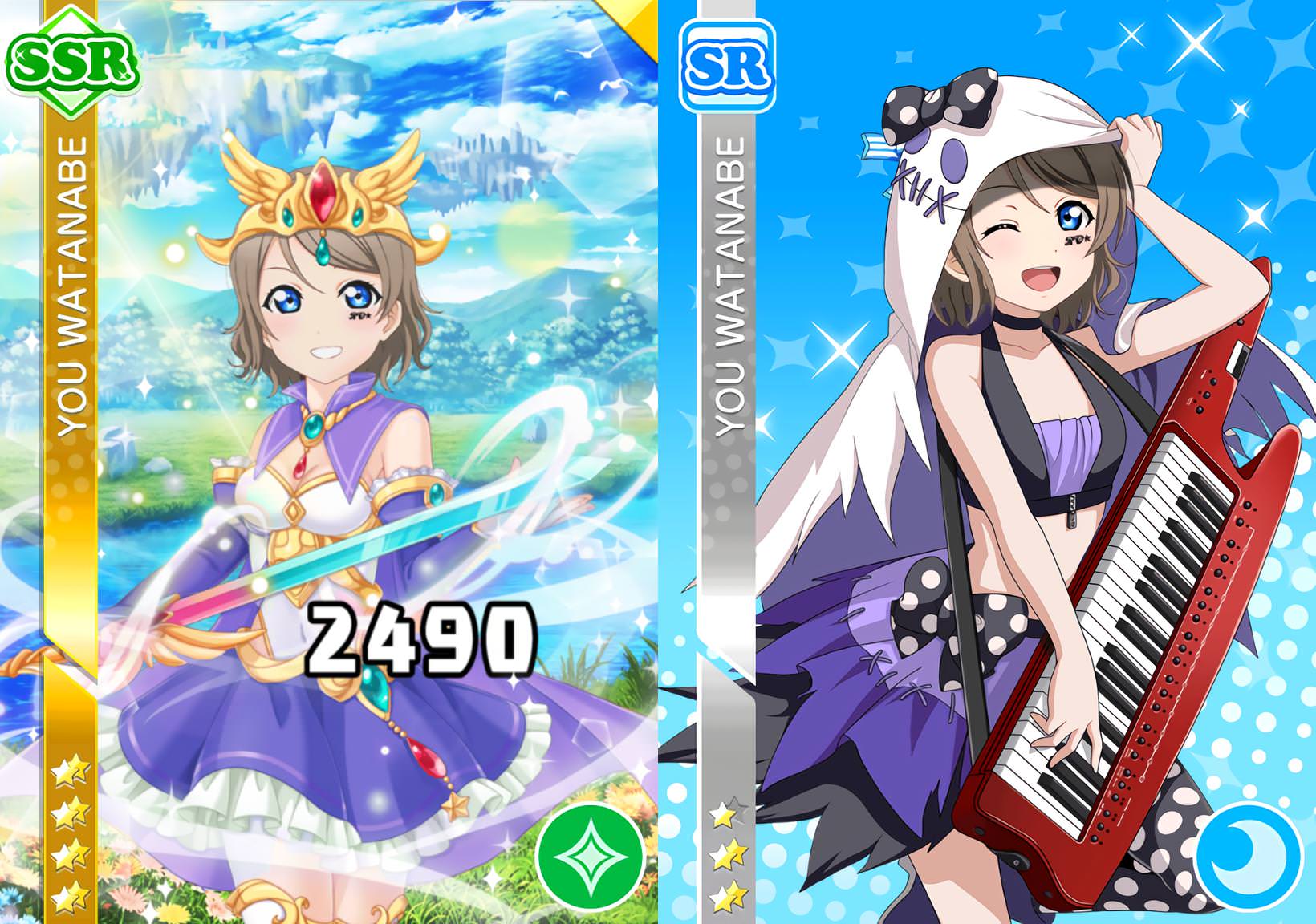 I tried to make 'my own' You cards. The one to the right is a BanG Dream edit and the left one is where I tried to make a fantasy-ish card, I didn't think it was fancy enough for a UR, so it became an SSR. The clothes and background are from the app Dream Girlfriend (btw one of the voice actors in the game is Nanjo aka Eli).

This is the part of the post where I show all of my cool merch and I would IF I HAD ANY (imagine that Fairly Odd Parents meme).

That was all for now I guess... I still have more edits I didn't finished in time and also a short video that I didn't finished either... I'll add them later. Maybe I should add some more pictures... meh no one is going to read this post anyway, most are just going to look at the edits and keep scroling (maybe leaving a like or heart or whatever it is called here), plus pictures take so much space on the hot page anyways... Well if you read this, don't might this part I'm just rambling. This post was supposed to be about You and not this hmmm... I'll keep this anyway.

(And also don't even think about stealing any of my edits)

EDIT: I made a video for You, where the other girls wish You a happy birthday and a lot of yousoros. I hope you want to watch at least some of it: YOUSORO!