I actually prepared this post a month in advance HAHAH anyway ;; Happy birthday to Kanan! I've loved her ever since I got into Aqours. Despite me playing SIF since 2014, I didn't really know about Aqours until a few months before they would be released onto JP. When I first got into them, I was just sorta like "Meh. I'll stick to u's, but I'll give it a shot."

And then I heard the preview of Tokimeki Bunruigaku and I instantly fell in love with Kanan's voice. She sounded like an angel. I know a lot of people don't like her voice, but for some reason it just really stuck to me. Naturally, I decided to check her out. After reading about her personalities and her hobbies, I learned that she's a "cool/older" character. That made me a bit weary because of course, I naturally turned to the character with a "cool demeanor" trope. I didn't want to end up liking her for being cool- similar to how I thought of Umi. Even so, I found myself really liking her. Heck, when Aqours came out as rares via seal shop I bought 10 copies just to get her into my profile.

I saw a lot in Kanan of who I wanted to be as a person. And even more than that, I felt some connection to her the more I learned about her character. For example, a lot of people hate how Kanan acted in the anime, where she did what she thought was for the better for her friends, despite them only being around 14. I will admit, the way she handled it could've been a lot better, but the fact that I knew that I would do the same thing made me appreciate her more. She did what she thought was the best for her friends, even if it meant playing the bad guy.

Another reason I feel this connection with Kanan is because she lives alone with her grandfather, while they work together in their diving-gear shop to get by. Not to get too personal, but this reminded me of my dad- he used to work as a fisherman, and back when he was younger, he would go fishing with my uncles all the time. I went a few times of course, and every time I was out on the water I felt this feeling of ease, sorta like "This was my home. I belong here." Even though I actually can't swim, when I'm out in the water I feel this sense of calamity that I'm sure Kanan would also feel if she were a real person. Now I don't have that luxury anymore due to complications. Even so, I want to do well in order to make my dad proud of who I've become- and I'm sure Kanan feels the same way, trying to do her best for her grandfather to help keep the shop running. She has a lot of weight on her shoulders between helping with the diving shop and trying to be the best friend she can, as well as doing idol related stuff- which leads me to think that she makes a lot of irrational decisions based on what she thinks is the best for others. It's a major flaw that she has, but it's what makes her feel like an actual character, and not just a mary sue.

There's just so much I can't put into words, but regardless Kanan truly means a lot to me. When I first picked up on card edits, she was the first one I did. Every time I try something new with graphic design, I always work with Kanan. Since I'm F2P and I can't buy any merch, whether official/unofficial/bootleg, this is the least I can do for her. I also have 3 goals I have in mind: the first being to obtain every Kanan card ever. R, SR, SSR, UR. All of them. However, my second goal, the most tangible goal, is to T1 every Kanan event. So far, I've been upholding this! My third and final goal is to have all top 10 "Favorite Costume Member" (where it's based on the bond you have with a specific card) be Kanan. My top 3 is in the bag, but I definitely need to work on this more. Since I refuse to break the wallet, this is what I can do to make up for it! I've made some posts with my history with Kanan since the beginning- and it really makes me happy, looking back at them!

My bond progress (I know it doesn't seem like much but damn do you know how many Rs that takes): 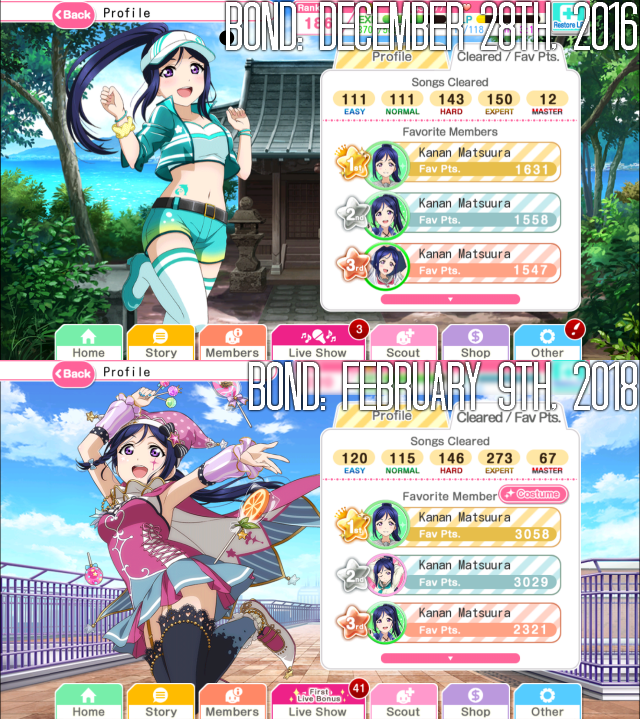 Scouting for her first UR

Wow this post is really long and really lame ;;. As you guys can tell, I really love Kanan and I've come to appreciate her even when she wasn't a fan favorite- and it seems like Kanan gets some form of redemption in Season 2, so I'm glad! To end this, below are a few photos that mean the world to me, as well as a new type of edit/gif I've been working on. I cut an arm and a leg working on these edits, so I hope you guys appreciate them! These were really hard and took a long time to make ;; Happy birthday Kanan! You mean the world to me ♥