It’s September again and I am here to wish Kotori a very happy birthday! The time between her last birthday and now have been interesting, both in terms of real life events and things that happened in the LL world. To start, KLab chose to ditch event SRs in favour of URs, which came a surprise to many people. Then, we had a server merge with the Japanese server in SIF. Many things have changed, but the one thing that has remained constant throughout this is my love and respect for Kotori. I always try my best to collect her cards and get high ranks in her events. With that in mind, let’s see the things I have prepared for Kotori’s birthday this year.

The first event on the list is the μ's token event we had in October 2020. We were at that transitional phase in the game where we weren’t quite at UR events yet, but we no longer had idolizable SRs from events anymore like we did in the past. In this event, Histy and I tied at 5,000,000 points for 1st place. It was a fun event and it was also special to me because the event song happened to be the first song from μ's in many years. μ's has and always will be dear to my heart because they are my favourite group and the group who got me into the Love Live world in the first place.

Next up is the NicoKotoUmi companion match from November. This was the first official UR event we had, and I had to make a decision on whether or not I would consider this a Kotori event since technically the event card was Nico, while Kotori was a scout card. I treated it as a Kotori event anyway and finished in 10th place. This event would also be the one where I decided to end my two year long top 10 event streak for personal reasons, but it would not be my last time in top 10.

In February/March, I reappeared in top 10 for cheerleader Kotori’s challenge festival event. I tied with HailKotori and Pumick for 6th place. We included Kotori’s birthday (9/12) in our event points. I had always wanted to include a meaningful number to Kotori in my event points, but I could never find the right time to do it. This event gave me the opportunity to achieve that goal.

In June, we were dropped in the middle of the RinKotoMaki score match event after the merge maintenance, so I decided to take it easy this event since the JP players already had a head start and it would have taken too much time to catch up to them in the higher ranks. I finished #281. I was lucky enough to get the flower Kotori from scouting, so it was nice to have her.

Finally, the most recent Kotori event in August was a token and I made it my goal to get top 100 for her. Since I was no longer aiming for top 10 anymore, I thought top 100 would be an appropriate goal. I did my best and finished in 78th place. I think her event UR is quite pretty. She looks so happy in the idolized.

On the SIFAS side of things, we had the White Day Kotori event. I finished in 3rd place and was happy to be able to represent Kotori. I hope I can get a good rank in the next event where Kotori is the event UR. 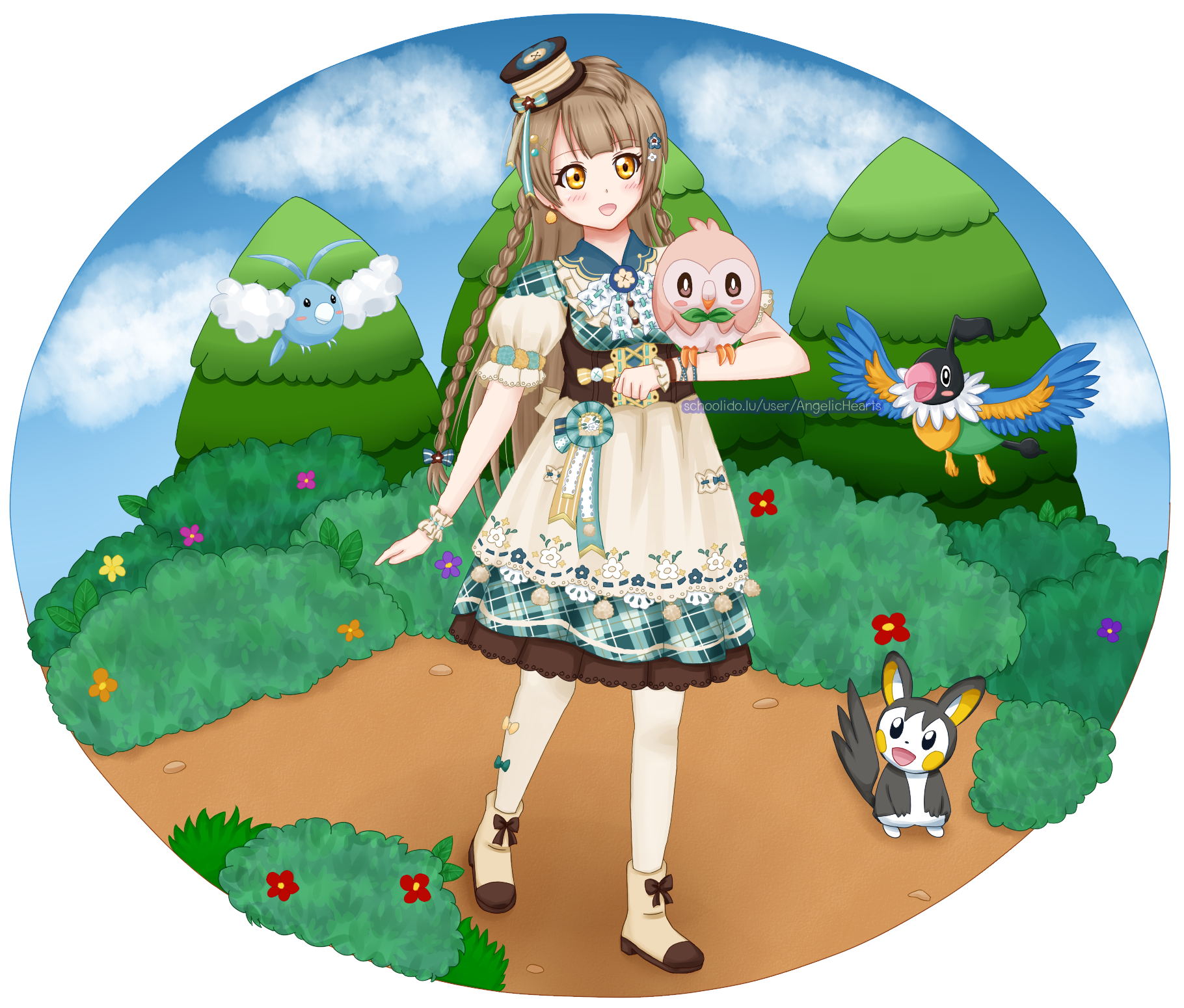 Here is the drawing I made for Kotori’s birthday this year. It took me a long time to decide what exactly I wanted to draw this year, so I finally settled on drawing her with some Pokémon in her SIFAS fes costume (with alternate colours). I usually don’t do full body drawings (or backgrounds, for that matter), but since it was a special occasion, I decided to try. It was fun, although the details on her dress took forever because there’s so much stuff on it.

Finally, here are the strawberry cheesecake cupcakes I baked for Kotori’s birthday! I try to do something Kotori-themed each year. The first time I entered, I baked bird-shaped cookies. The year after that, I made an entire cheesecake. Last year was cherry cheesecake bars. This year, I decided to go with cheesecake cupcakes. It’s always fun to bake things for Kotori’s birthday because I get to try out new recipes I haven’t tried before. They turned out to be very tasty.