this post made me wanna try and make an "evil" idol because I'm usually extremely bad at that (I just love making everyone likeable in some way), and I figured I could use this concept for something a bit unique and very mean so here we are (I know I said I'd shut up but!! this is art it counts okay,, I spent a long time on this and I don't rly know why) 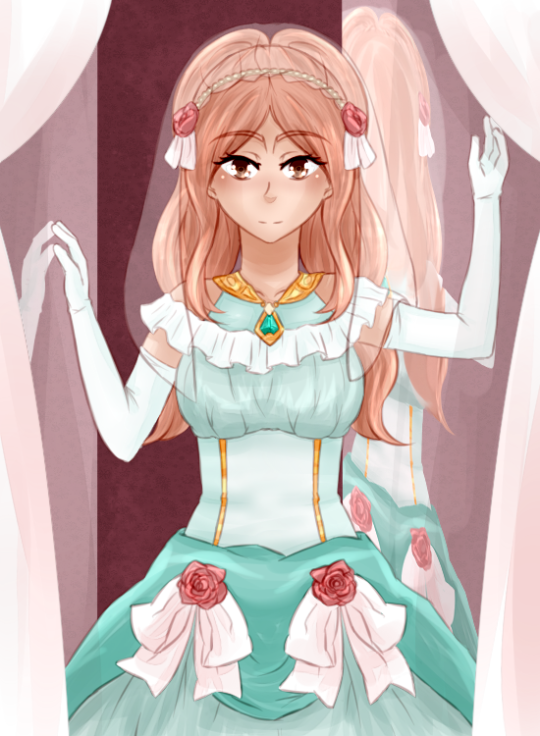 this is Amaoto Kiyoku (written as 雨音旭, I really gotta start putting the kanji in these posts), a 2nd yr, and she excels. at everything. not because she's a genius, but because her father, a bank owner who sponsors a lot of notable events, expects it from her. she's set to inherit the manager position someday, but until then she is to make a name for herself, and she does so via school idol work.

she has been trained from an early age on in everything that has to do with musical theatre - her vocal range is ridiculous (ranging from contralto to, if properly warmed up, decent soprano notes), she frequently gets voice acting work since her voice is extremely versatile, and she can easily switch through natural reproductions of many types of personalities. becoming a school idol was a given with how popular the concept is and what it means to be well known as one, even if nobody comes even close to her standards, so she works alone. she's also not aiming to win Love Live or anything, she just wants to make a name for herself.

her father is a very ruthless person who will discard even his own family if they don't meet his standards (in fact he had twins with a pro volleyball player whose team he sponsored, but wasn't satisfied with the children and left them when they were six, but that's a whole other OC bunch--). Kiyoku is the same way. she doesn't care for anyone unless they are of use to her, and as soon as they aren't, she's out of there. a lifetime of acting and studying people's emotions have made her incredibly perceptive, and she absolutely uses that to her advantage.

Kiyoku isn't the type of person who ruins someone's idol clothes or messes with the tech or even hurts them physically. she's the type who sings a duet with a rival idol for the sole purpose of showing off how much better she is to the other's fans. she gets people admiring her and wondering if they can ever be as good as her, and she "gently" lets them down, letting them join her and even befriending them so that her final words of "I guess you're just not cut out for this" hit harder. she plays with people's fears and hopes until they quit or mess up, and she gets others to join her side (only to do the same thing to them later if they become a threat). her fanbase is kinda infamous for flaming other idols online, but she distances herself from them quite clearly, because she would never condone such behaviour (wink wink). there's people she's broken so badly they've sustained emotional trauma from it, and yet nobody believes them, because she's an angel, right? she doesn't act like a bad person at all!

I'm not really sure what her role in the story is gonna be, but especially her interacting with Kairi, Sai, or Mariko could be veeeery interesting. also Tomoe. cause Tomoe's pretty much already broken and she could make it so much worse