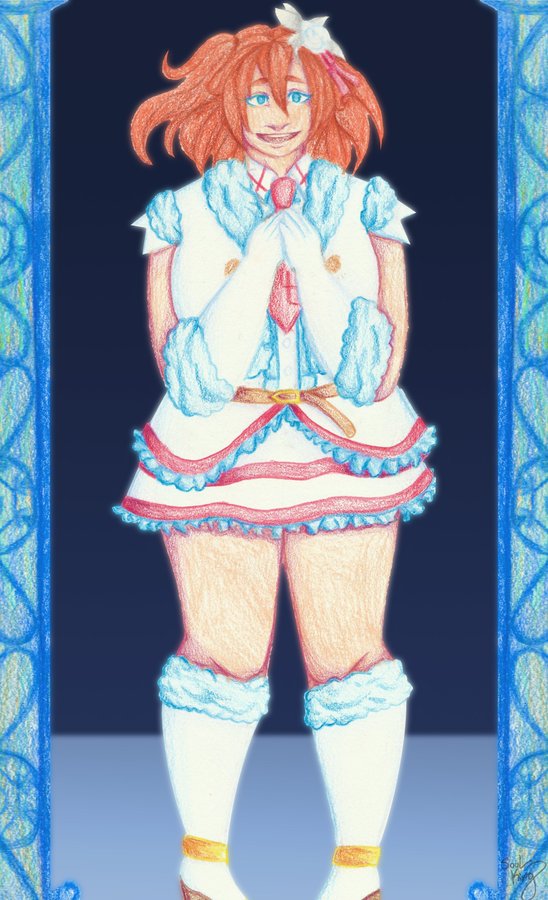 i wanted to wait until honoka's birthday box went down on ww before making a post but then i thought "i honestly don't feel up to image editing" so i'm making it now! i'll eventually add onto this with the birthday drawing i'm making but i haven't had the time to make one until today

i entered last year and i feel the want to enter again because of just how much honoka means to me. i've entered a few contests this year and while you, yoshiko, and maki all mean a lot to me as well, honoka is still the girl i have the highest connection with.

when i got into love live, i was living in my grandpa's basement after having just moved out of a motel that we moved into assuming it was a "temporary" living space. i was incredibly poor and depressed, the series i was into at the time was losing popularity and though i clung to my rp group for stabilization, there was only so much it could do for me as i had to create a lot of the content i wanted since it was for ocs.

my friends that i called with on the daily, including another friend who we didn't call with as often, introduced me to love live as they play sif. i eventually caved and downloaded it, couldn't play it as the wifi downstairs was awful, and decided to instead watch the anime. i've had a tendency to like protagonists, but it was always for reasons other than how upbeat they were. honoka appealed to me as i could connect to her in a way that read to me "she was made to make me feel better."

when i moved later that year to my grandma's house in a different state, my rp group and love live were the main constants in my life. i vividly remember having traveler's sickness after moving and i hadn't enough time to save up pulls for cyber honoka, my favorite ur of her's, so i was using every solo i could to get her. i ended up pulling her from a solo during one of my main bouts of sickness. the momotarou event happened some time after i moved and i effectively wrecked my right wrist tiering for her because i wanted her. even to this day, i still feel a pain in my wrist if i try playing any rhythm game with my thumbs. i keep this card on my pure team regardless of matching or if a different card would make the team stronger (which i actually haven't come across issues with).

being as my financial situation then was worse than it is now, i never was able to buy merch on my own. most merch came as gifts, but i still appreciated them nonetheless. i'll be honest, only about three of my honoka merch out of the very few i own were bought by me. i found a snow halation honoka jumbo neso on amazon this winter that was like 50 bucks shipped and i jumped on that immediately as i had birthday amazon cards to use and i wanted more honoka merch. i got kind of lucky that my fave girl was unpopular enough to be cheaply sold, even her nendo was super cheap compared to some others. i use the neso to help elevate my arms at night since she's the largest plush other than my monobear plushie that i own and unlike monobear, she's easier to cuddle with

i own a cosplay wig for her, but to this day i still haven't had the money to buy a full cosplay, though eventually i do want to grab a marine cosplay of her.

i've dedicated a lot of time and personal money to her over the years, and i'm sure i'll continue to do so until love live's inevitable end. i honestly don't have any other characters than yoshiko, you, and honoka that i would continue to dedicate time to and it'd be a shock if i manage to find others. the positivity that honoka gives me and has continued to give me for the past 3-4 years has made me a better person and has kept me from falling into deeper depression pits than i would be if i didn't have love live in my life.