Hello! This is my first time posting an activity so please excuse my formatting if it’s a total fail.

This is my last minute entry to the Hanamaru Fan Awards:

I will admit, I tend to like the characters that stand out to me first. This was mostly true for all the idol games and shows I've watched; I just tend to form an attachment to the first thing I see. So what about Hanamaru? Was she the first Aquors member I saw?

Yes and no. Riko was the one that stood out to me, but Hanamaru was the first in Aquors to get a paired UR. It was after the release of that UR when I first thought of Hanamaru as my favorite Aquors member. To me, it feels like a weak reason to like Hanamaru. The card is beautiful, but I knew nothing about her personality. Can I really love someone just based on their appearance?

Perhaps, it was because of that UR that I wanted to learn more about Hanamaru. I started watching the anime, and I fell in love with everything I saw about Hanamaru, from her love for books to her cute verbal tics ("zura" reminded me of Zura from Gintama, my favorite anime!).

Like for a lot of Hanamaru fans, episode 4 was the best episode for seeing Hanamaru's personality shine. I resonated with her tendency to be alone. I like to be alone, but there are moments when I feel lonely. I'm also quite shy and I don't have a lot of courage to speak my mind. I don't have many friends, so I tend to cling to ones I do have. When Hanamaru thought wanting Ruby to shine, I felt that that was something I wanted to do too; I wanted to be the “Hanamaru” to my closest friend and be the positive influence that helps her grow into a beautiful and successful person. Though she may not think that she's cute or interesting, her beauty shows in her deep caring for her friends. I felt like there were roses blooming from every part of her body when she talked about Ruby; her beauty is almost blinding.

Many people say that she looks too plain and boring (or maybe that's just my friend D:), but for me, her appearance is the part of her that stands out to me first. Being the "plain one" of the group, Hanamaru showed me something: if I try hard to reach for my dreams, I can fulfill them, regardless of my appearance or disadvantages. Maybe Hanamaru's success as an idol was a stretch, but I still feel inspired by Hanamaru's desire to be an idol despite her lack of confidence in herself.

So, what is Hanamaru to me? She's not just the character I like to look at, or the character I just happened to like, she's many, many more things. She's the friend I want to be, the idol I love to listen to, the one person I want to meet the most, and the best friend I could ever want (to name a few!). Hanamaru, Happy (superrr belated) Birthday!

Now, here are some methods of how I express my love for Hanamaru:

Merchandise My collection is pretty small compared to others, but what I do have carries a lot of meaning to me. My Hanamaru figure was the first figurine I ever got, and it was a gift of love from my parents for my birthday! The Hanamaru nesoberi was my first buy from the first convention I ever went to, and it's my favorite plush in my giant collection of plushies (I even brought it to my club yearbook photo haha). The clear poster of Kimono/Festival Hanamaru was a chance pull from my first visit to Japantown from one of those boxes where u can get a poster of one random girl. Finally, I have two charms from convention visits and the items from the Hanamaru Birthday Box for this year (I really love the shirt!!). 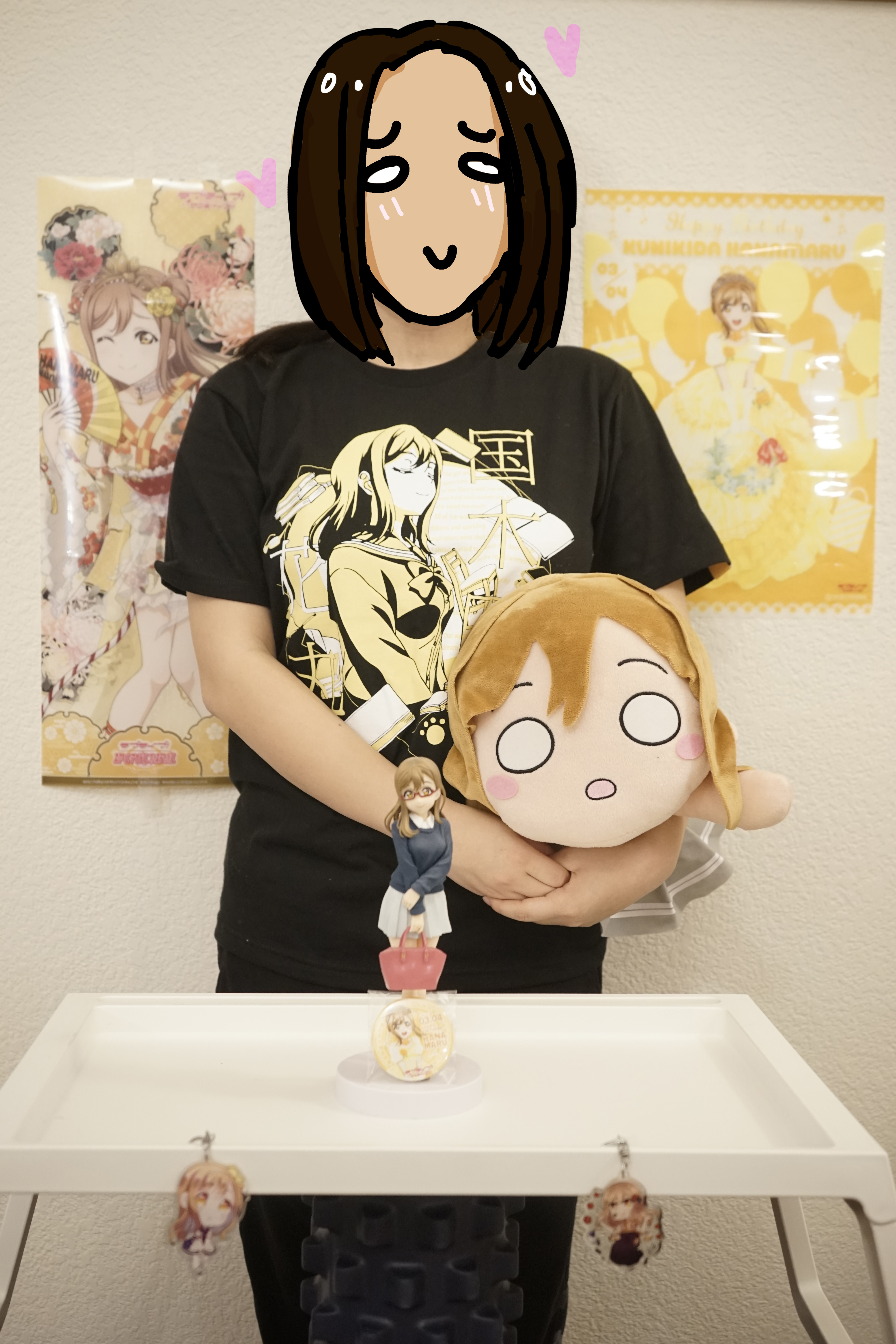 SIF Honestly, my luck on SIF isn't so great... On both servers, I have under half of Hanamaru's cards, so it's not much of accomplishment. I mostly pull in boxes featuring a Hanamaru UR, so it kind of amazes me that I still only have 3 Hanamaru URs across both accounts (minus promos). My luckiest pull for Hanamaru was my second copy of the first Hanamaru UR. That pull was important to me because it was my second idolized UR ever and my first idolized Aquors UR (first idolized UR was Job Kotori, which is perfect because Kotori is my favorite from Muse). My favorite non-UR (all the URs are my favorites tbh) Hanamaru cards are the Haregi SR, the Snow Fairy SR, the China Dress SR, the Circus SR, the Christmas v2 SSR, the Wedding SSR, and the Angel SR (why are Hanamaru's SRs so nice?!).

Drawings I love drawing, and I especially love drawing Hanamaru. She's really easy to draw but still so pleasing to draw~ I often doodle her in class when I’m bored, so here is a collage of a bunch doodles I've done on random papers, plus a more dedicated drawing of the UR that caused me to fall in love with Hanamaru! (Also, a small extra comic! Also, I don’t know why, but my style fluctuates wildly; one moment, I want to draw her in a cutesy anime style, and another moment, I want to draw her in a more cartoony one. I wish I could draw you correctly TT) 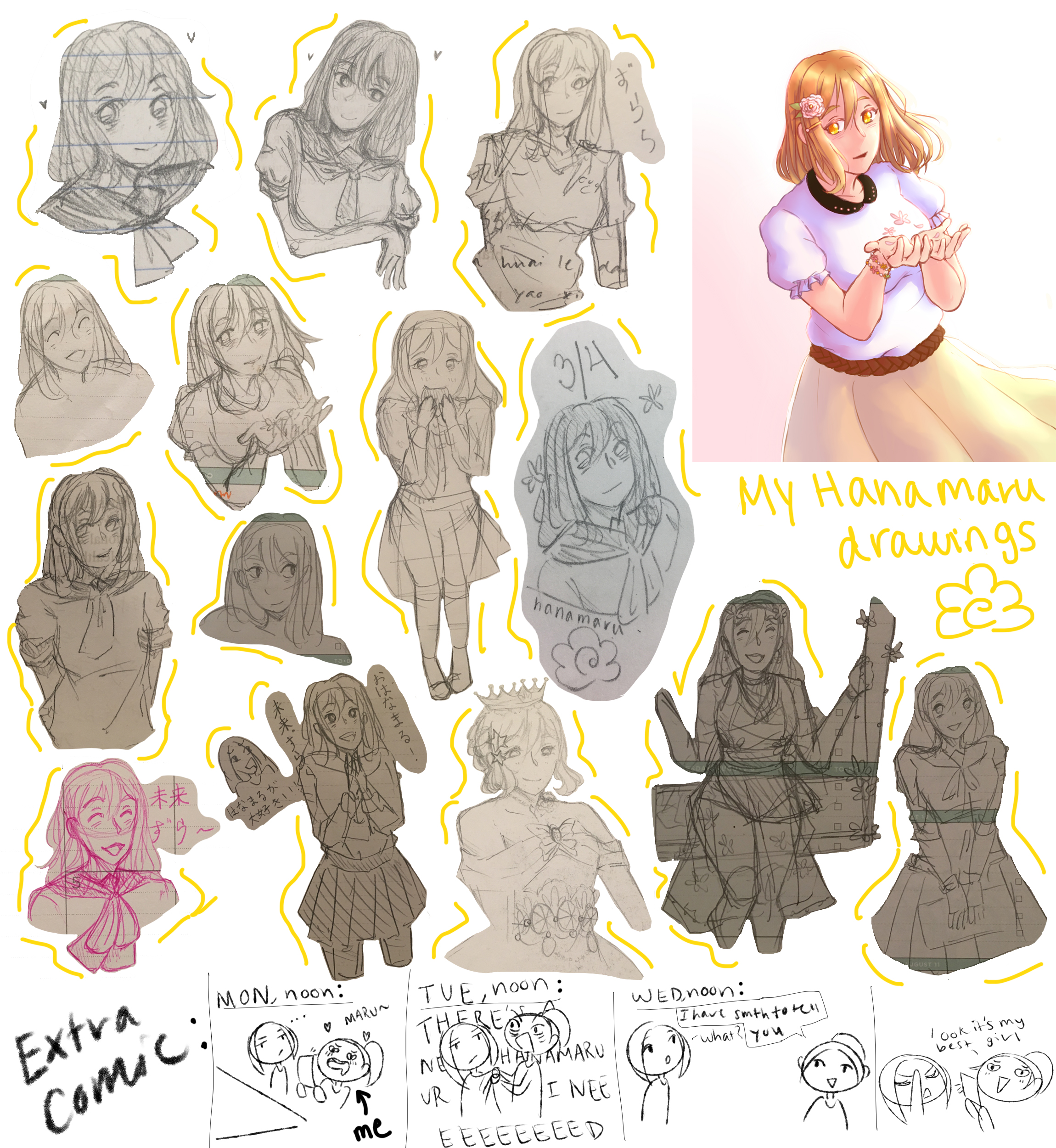 Animations My first animation was of Hanamaru (it was to test an animation program I downloaded). This animation was made for Hanamaru's birthday this year! I really want to make a more detailed animation of Hanamaru for her birthday next year, so I’ll be practicing for that!

Other Wait... what's this? Is this too much? Is this overboard? It might be a bit unnecessary, but it’s to celebrate Hanamaru’s birthday (in a really weird way)? My explanation: her birthday is 3/4, so 304 flowers. Since 4 is the number she calls in the Aquors roll call, I did 304 flowers each on 4 sheets of paper, for a total of 1216 flowers. I did something like this last year as a sort of “luck booster” for a test, and for this year, it's a blessing for more Hanamaru content! Wow, it took quite a while... (I’m sorry… I didn’t have a yellow pen so I used the next closest color…) 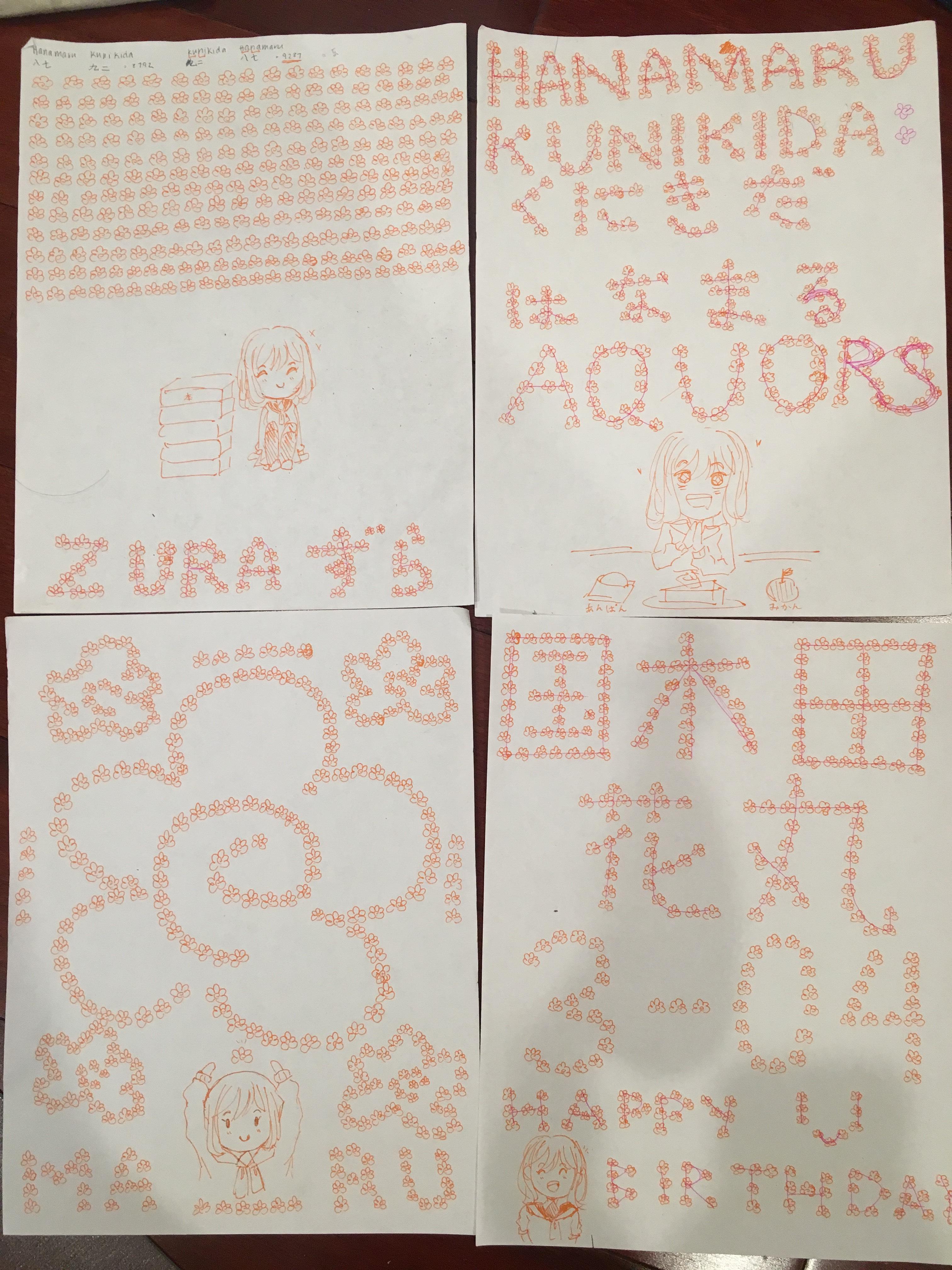 Hope you enjoyed reading! I look forward to the next song featuring Hanamaru as center (so I can hear Hanamaru’s/Kin-chan’s angelic voice shine)! (´꒳`)