Happy birthday Dia and a happy New Year! I’ve been looking forward to this day for a while now. Part of it being her birthday box, another part is seeing all the new fanart for her special day, and of course being able to do something special. I’ve had favorite characters before, but never has one affected me in the way Dia has. When Sunshine was first announced, I remember going through all the girl’s bios and artwork trying to find the one that would become my favorite. I had gotten the June 2016 Dengeki G’s magazine to look through more art and get a poster of Aqours together as my first piece of merch. At first, Dia was just one of the girls I didn’t find very interesting, but I still said to myself, “I’m gonna end up likin’ you, aren’t I?” while looking up at her on said poster.

Well, fast-forward a bit to when the anime was airing and I knew Dia was going to win for a simple reason. She portrayed herself as a stern, cold perfectionist. She was determined to get all her work done and for everyone around her to follow the rules. I expected her to be like Eli, with a discern towards idols and would pose a threat to the rest of the cast. Then came the moment she threw herself on the table to argue back with Chika, something I hadn't expected from the way she had behaved up till then. I loved every second of it of course. Something about the supposed super serious girl being overly dramatic with her actions I found endearing. I knew then that there was more to her than just serious student council president. As the show went on it became extremely apparent, she was a dork, one big idol loving dork. She was a fangirl but tried to hide it behind her serious face. Despite her attempts, her love of μ's would seep through for comical effect. I ended up loving everything about how she behaves. I could relate to her thanks to that. I tend to be very serious when working on a project but I can turn into a complete goof. Usually, I don’t to avoid the awkwardness my shenanigans can cause around people who aren’t accustomed to my behavior.

She isn’t just a dork, of course, she’s an amazing big sister. As a younger sibling myself, seeing Dia comfort and protect Ruby reminded me of my own sister. While she came off cold at times to Ruby, it was still out of sisterly love and a desire to keep her from going through what she had.

I could go on and on about her and why I love her. I always find something with her that makes me smile, be it something from SIF or just a cute piece of merch. That’s why for her birthday I always want to do something fun. She gives me so much happiness that I can’t help but want to return the favor in some way. So, I decided to start a now running tradition of making something for her birthday. As I did last year, I made her a cake and decorated it myself. This year though I added some cookies for the fun of it. 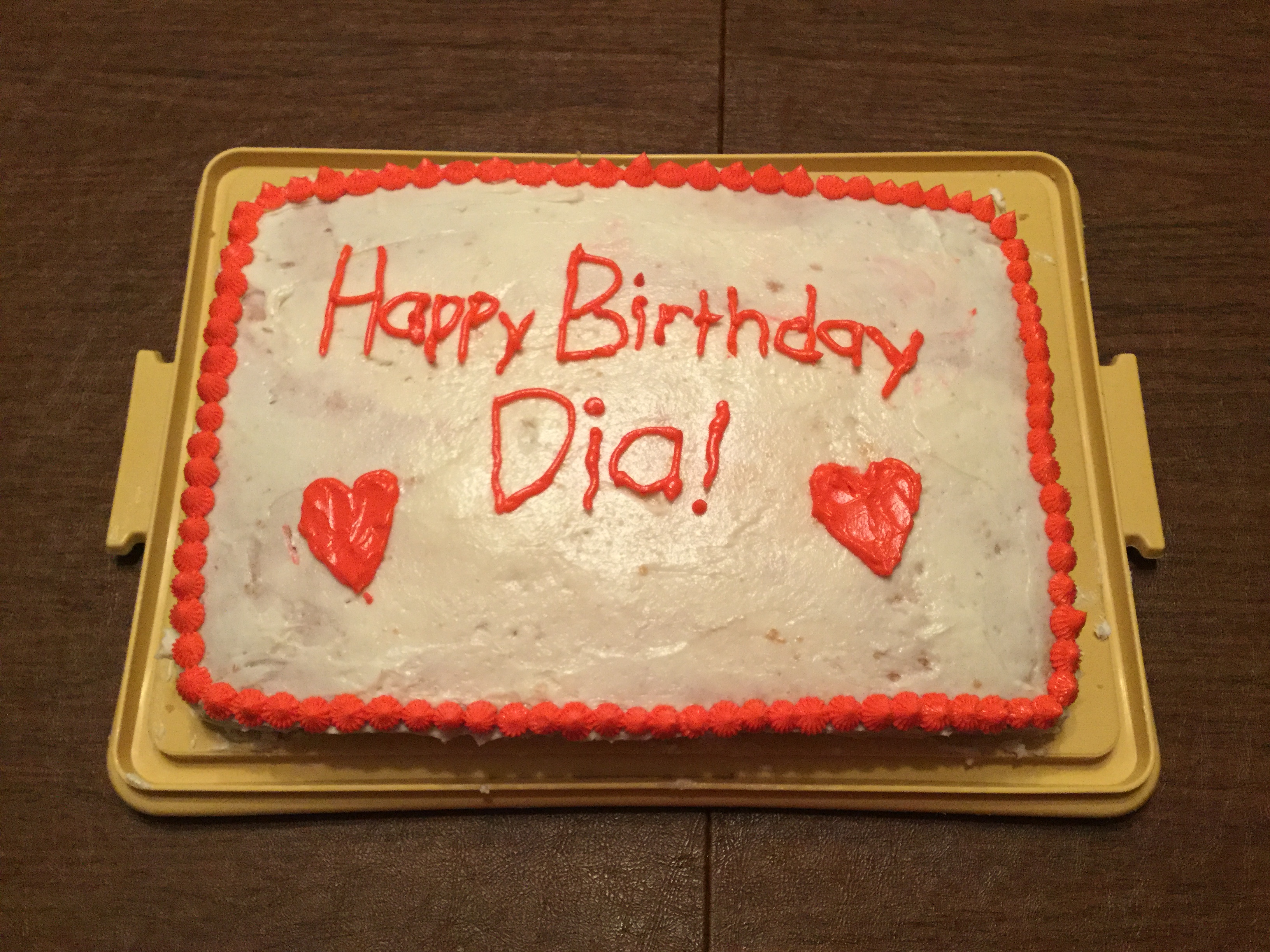 Making the cake wouldn’t be enough of course. It had to be special. She deserved to have a little party with her fellow idols. Looking through my nesos I decided to bring Chika and Yohane along to complete the GuuRinPa trio. I wanted to make it look as though they came to celebrate and end up causing some shenanigans by trying to feed her everything at once in a jovial manner. 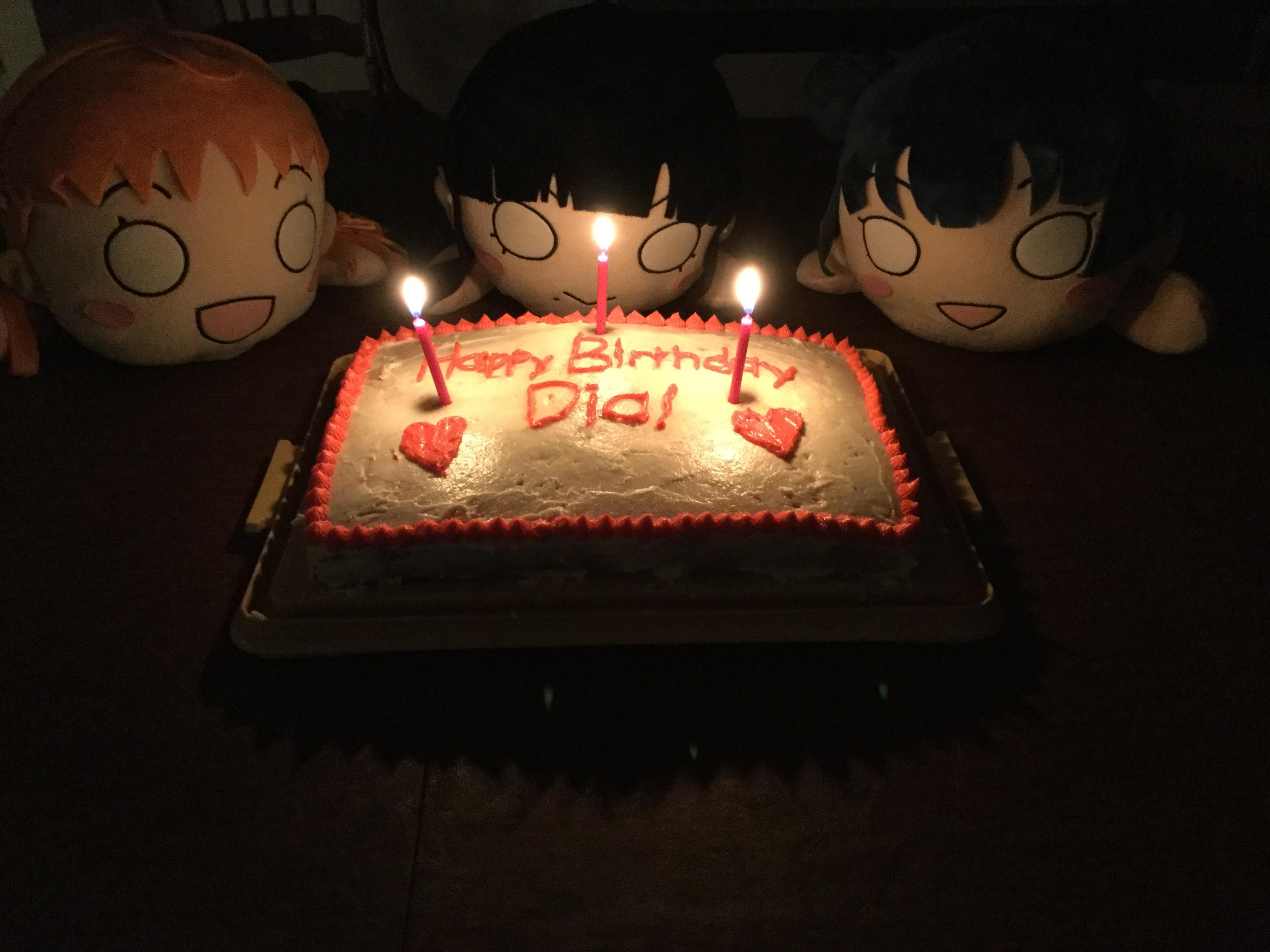 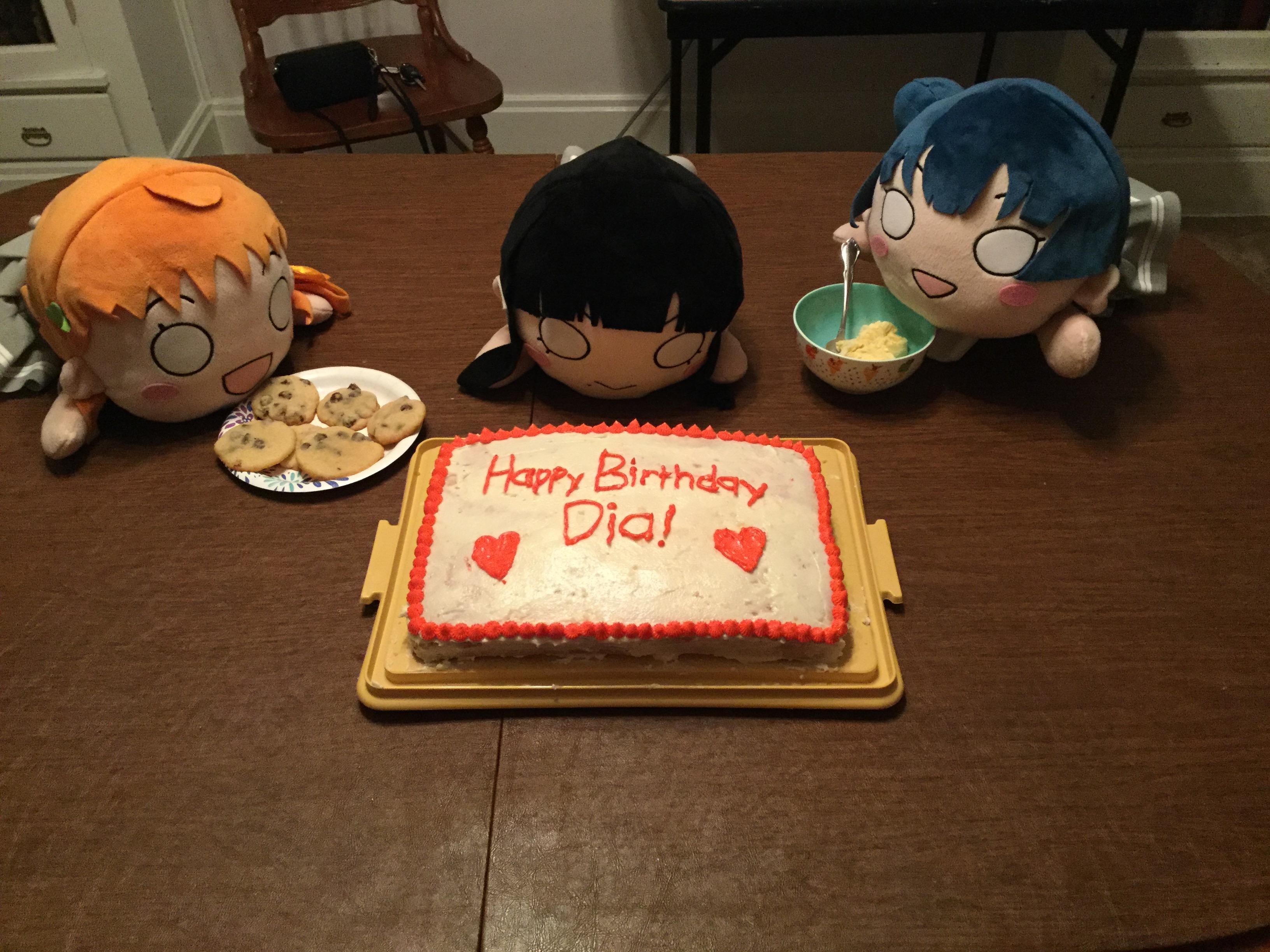 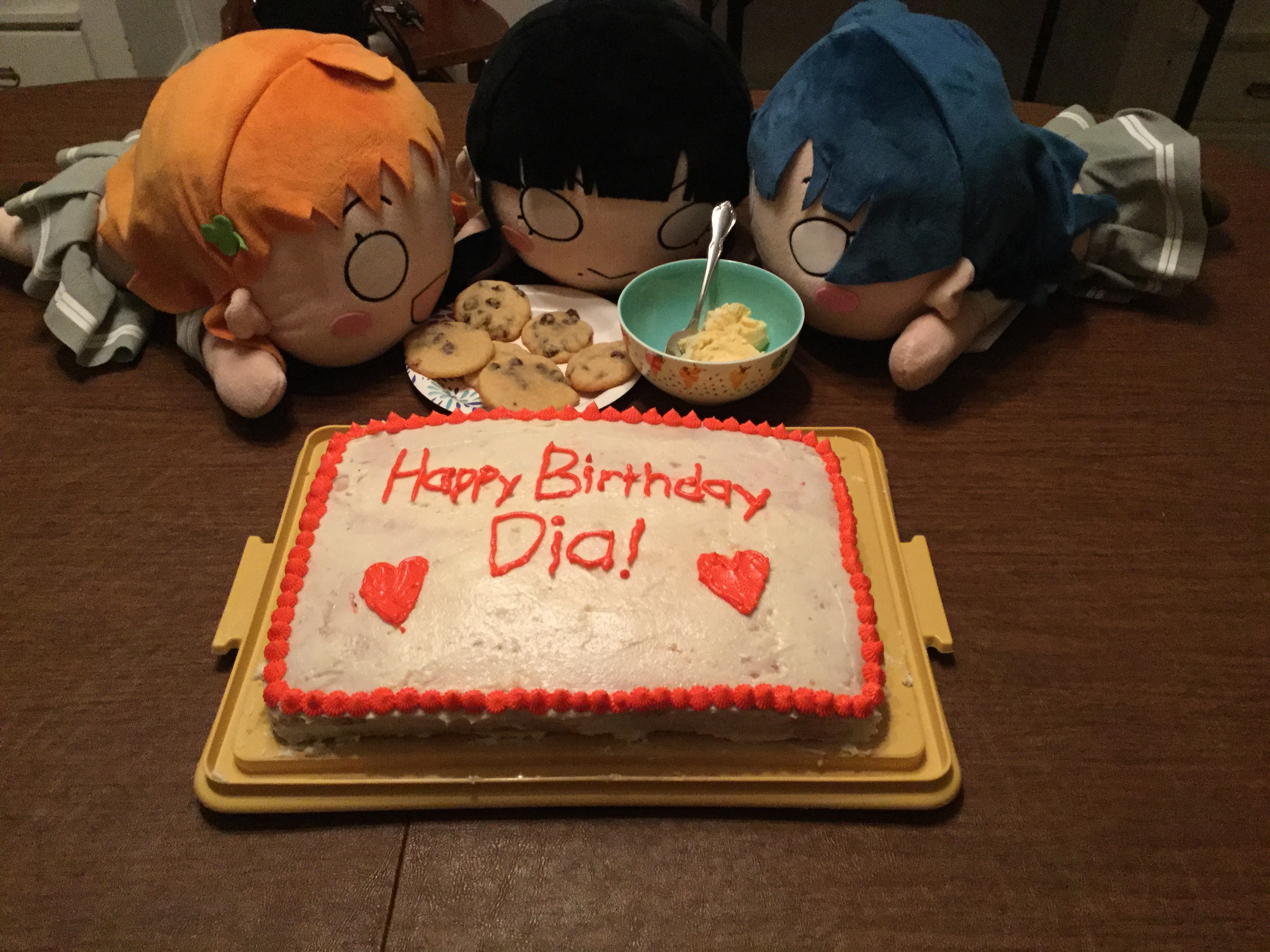 The neso party wasn’t all I did for her birthday. I decided to go through all my merch to create Dia a birthday shrine on my desk. After some incidents of little nesos tumbling away from their designated spot and pins refusing to sit up properly, everything was completed. 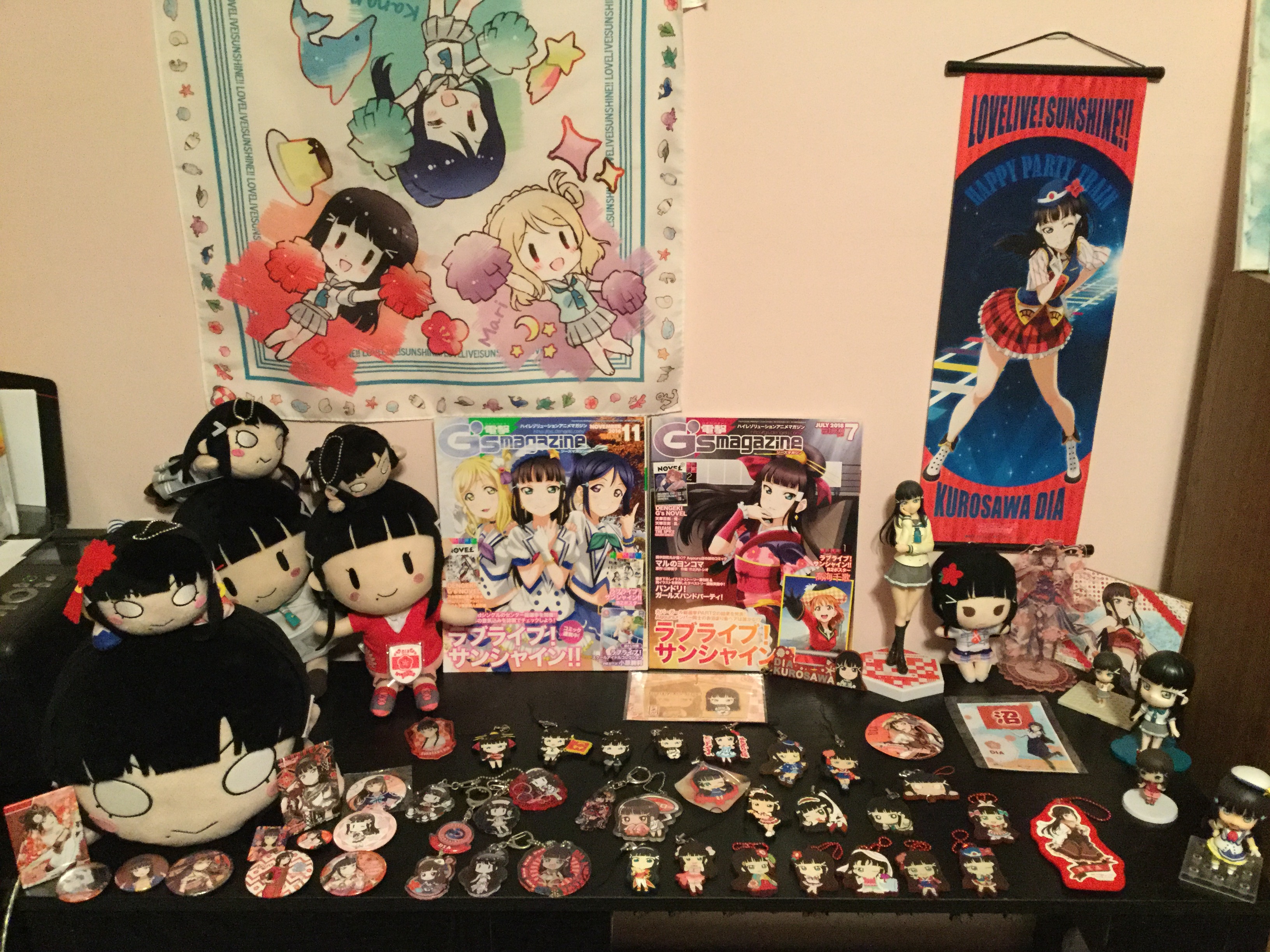 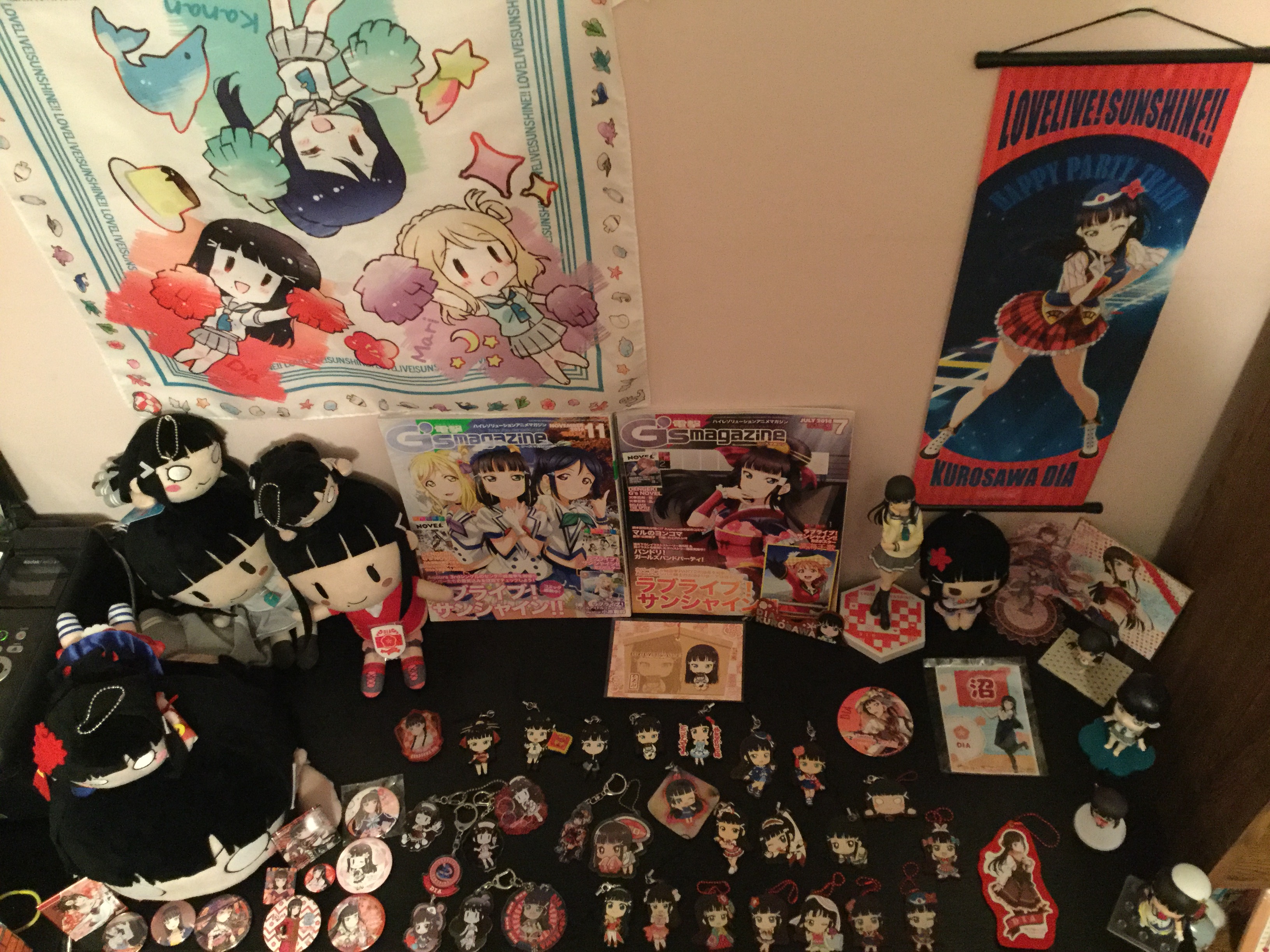 If Dia is on a piece of merch I very likely would want to get it. The idea of having a space dedicated to best girl put away in properly themed bookshelf sounds like wonderful to me. While at the moment that is just a dream, I hope down the road to provide a proper home for all my Dia merch, along with Aqours as a whole.

As for how she has treated on SIF, she has been kind considering the cruelties of RNG. Autumn Viewing Dia scouting was one such cruel event where Ruby decided to come home five times and no big sister in sight. Thankfully she did come to me in a step up. While her birthday pulls were not what I had hoped for, being mostly dupes I’m still thankful for this pull. I didn’t expect to get the very thing I wanted. Now here’s hoping that her Universe card will come home or avoid me to have fun in space. Also, a big thank you for the Christmas choose an idol box because I missed out on Haregi and Wonderland originally. 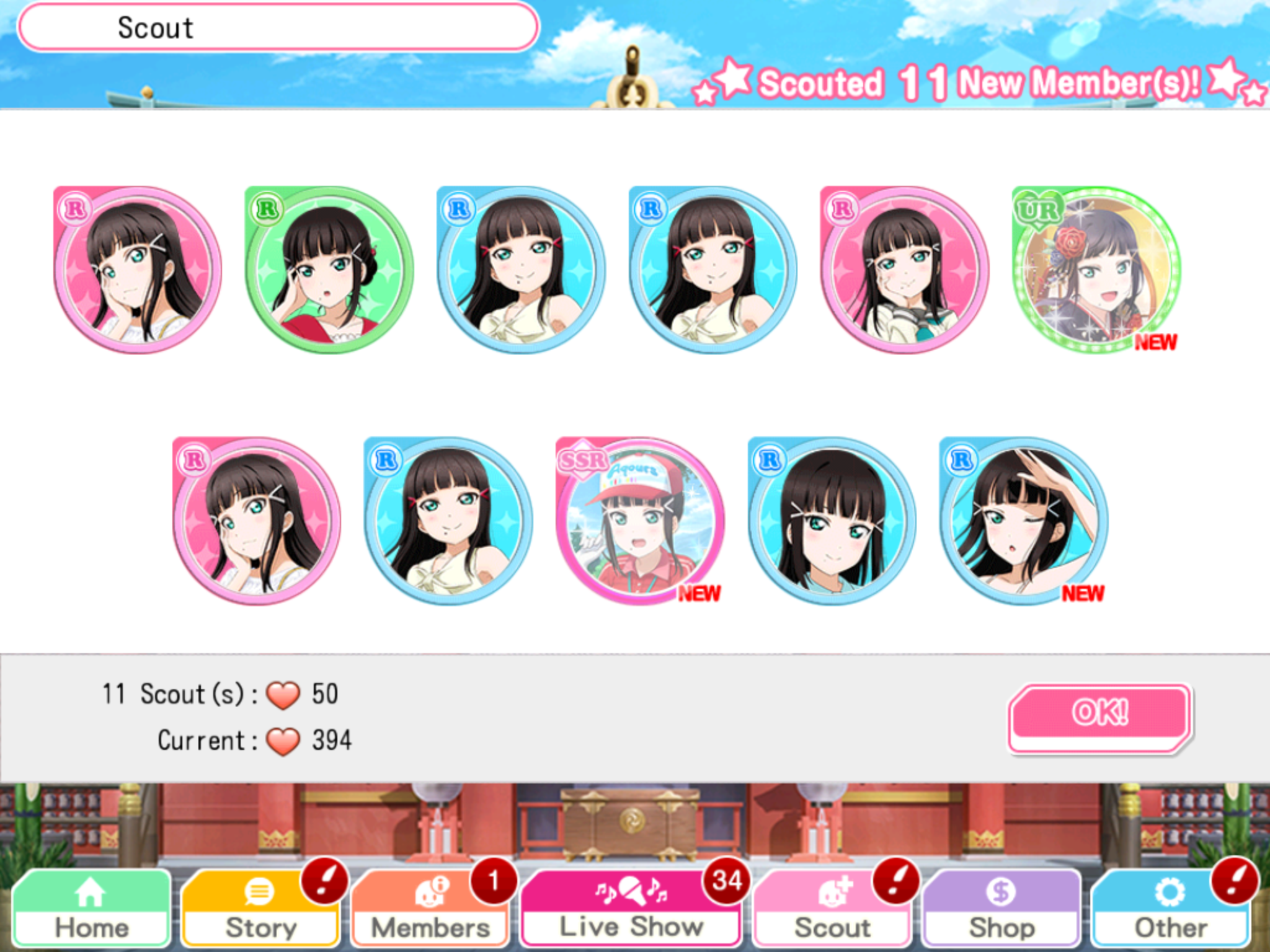 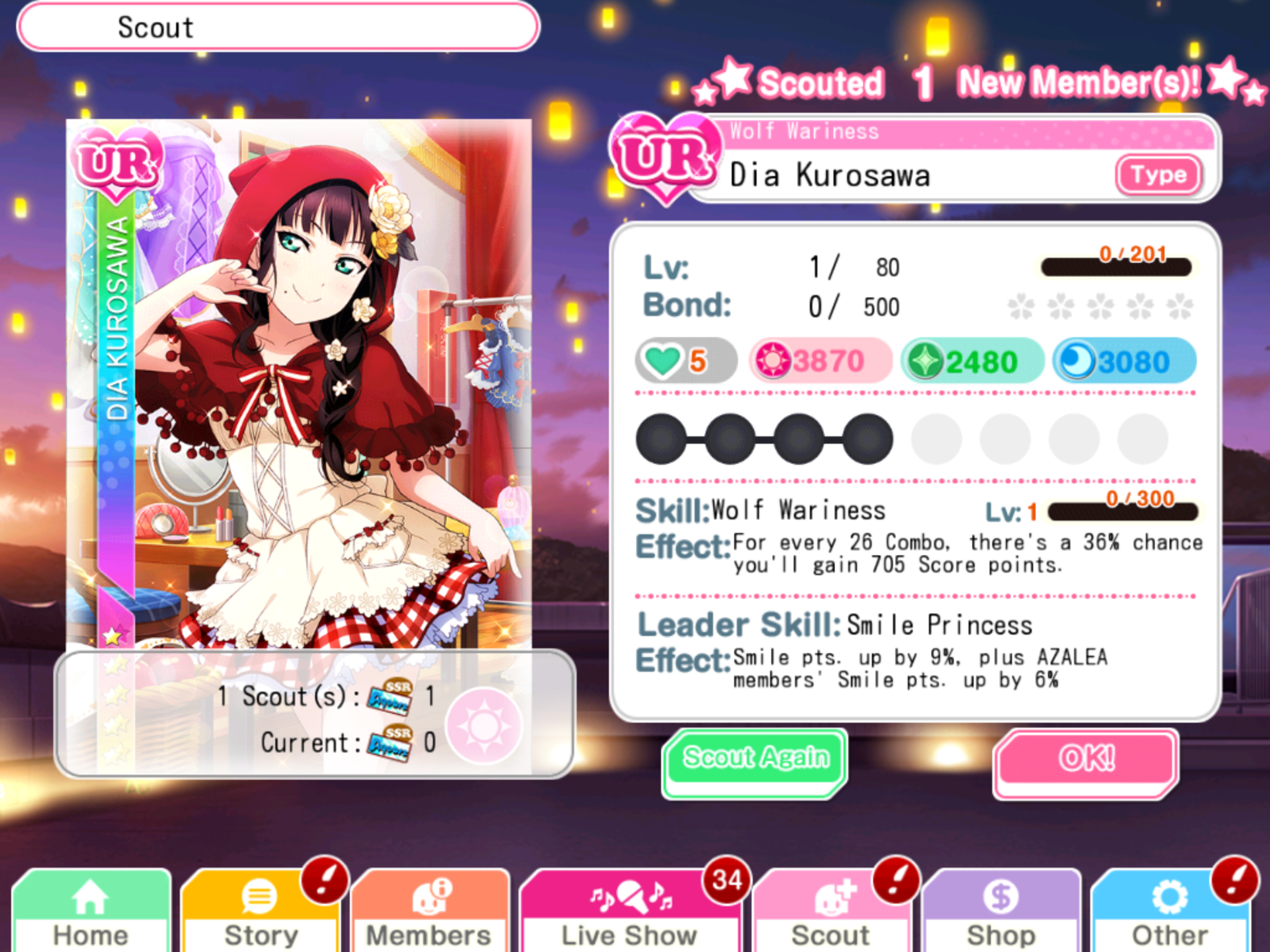 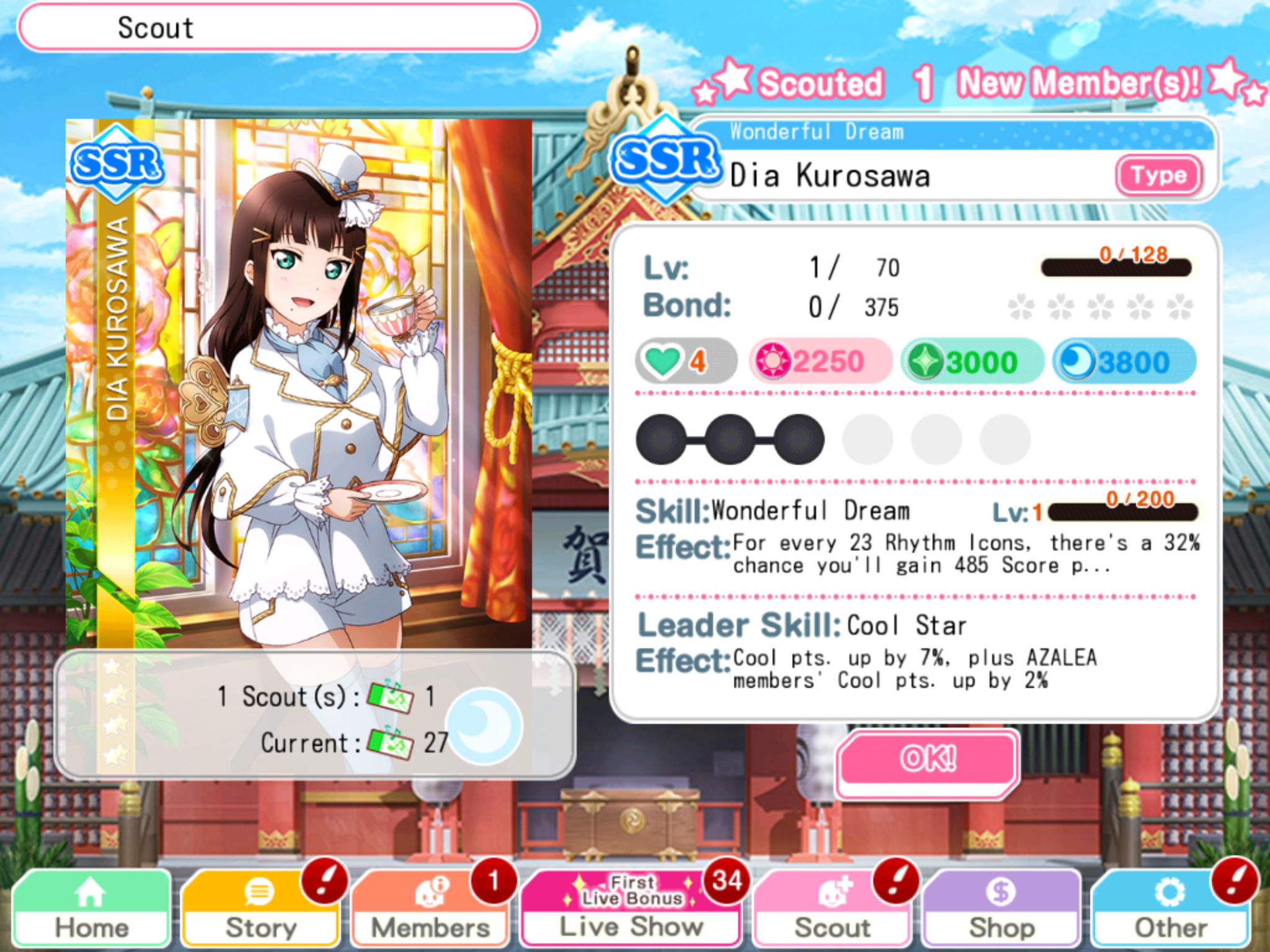 Once again, happy birthday to you Dia. Thank you for all the happiness you bring me on a regular basis. No one character has ever made me as happy as you do. I hope next year I’ll have an even bigger shrine dedicated to the queen of the buu buu and maybe she’ll have a neso party with more of Aqours.